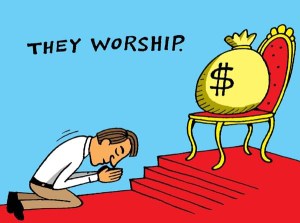 We all shy away from the image of bowing down before an idol.  We do not worship images, statues, people, right?  I mean we obey the First and Second Commandments don’t we?  There are no golden idols in the house, no fetishes; so we have these commandments covered.  In 2nd Chronicles 15:8, Asa took courage and went throughout the whole land of Judah and Benjamin and even the cities he had captured,  removing the DETESTABLE idols.

I wonder what would happen if we took this commandment to heart and went through our home, our lives, and removed the “detestable idols”.  What is an idol according to the word of God?

I would also say it is ANYTHING that takes away from the time you have for God.  What comes before God, before time in His word, time to pray and intercede for others?  Sleep? TV? Food? Computer time? Games? Pet?  Maybe they are not golden images that you face and bow down to  but they’re  idols just the same if you do not take the time first for God.  We will spend an hour on FB but say we do not have time to do something at the church, or time to read His Word.  We have time to get a cup of coffee with a friend, go to a movie, or workout at the gym, yet we do not have time for Him.  None of those things are bad in and of themselves, but their priority placement makes them idols.  Sometimes it is not removing something so much as it is prioritizing them.  My family is my priority, but God is first in that I spend time in the Word and prayer, even praying for them.

When you do not have time to read His word, but you have time to text, FB, play a game, do a crossword, you are placing an idol before Him.  When will you have the courage to remove your idols?

One thought on “Who’s your idol?”